I hope you know that your iPhone or iPad is capable of scanning a QR code using your camera.  This is a function that is discussed in  Nugget #8 Read QR Codes with your iPhone. This function works perfectly if you encounter a QR code in a retail store, park or elsewhere.

However a club member asked about a different need with a QR code.  It might be a QR code that you captured in a photo or a screenshot.  With the camera approach used by the iPhone or iPad, you would have to print the photo or display on a different screen in order to read it.

There are dedicated QR code apps that would allow you to scan a QR photo.  However, there is an app that many people already have on their phones that would scan these photos, the Google app.  With the Google app, you would use the Google Lens function.

You generally don’t need the Google app in order to perform a Google search on your device.  You can go a Google web search using the address bar in your Safari Internet browser. See Recipe #441 Searching the Web with Google – Tips and Insight.

However there are additional functions that the Google app presents including Google Lens.

Google Lens is a object recognition app from Google that searches an image or camera view for information.  You can use it for QR codes, bar codes or any object that you point the camera at.  If you point the Camera at a picture of the U.S. Capitol, it will identify the object as the U.S. Capitol Building.

Find the Google app in the App Store.  Search for Google in the App store to find the app. 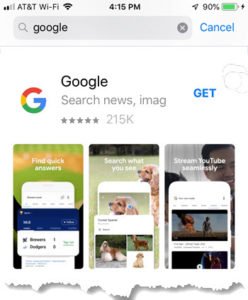 The app is FREE as indicated by the GET instruction.

The app’s icon will be added to the home screen.

Watch a short (under 2 minutes) video demonstration below to see how it works.

Works on iPhone and iPad 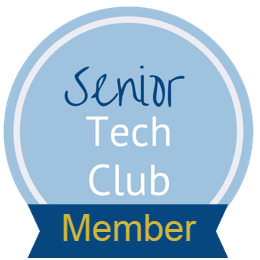