Organizing your Photos with Albums 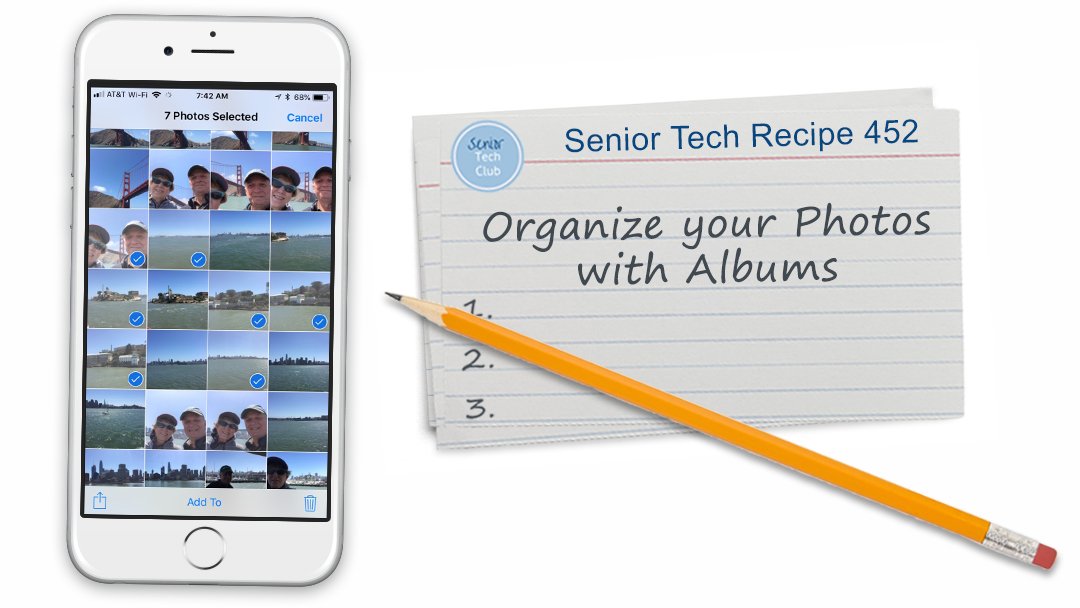 Let’s see a show of hands. How many of you have browsed through hundreds of pictures looking for a specific family picture that you wanted to show.

At that point, you say, I have to organize my pictures so that I can find the photos I’m seeking.

The primary way to organize photos in the Photos app is to create and place photos into albums.

This recipe will show you how to create albums and add photos to your albums.

The Photos app has a number of preset default albums that you can see by tapping the Albums icon at the bottom of the Photos app screen.

The default albums include:

Photo Storage – Just One Physical Copy of the Photo

When you take a photo with the Camera app will create one photo stored on your iPhone in the All Photos album. If you have not implemented iCloud photo sharing, the primary album is called Camera Roll.  That same photo will also be placed in the Recents album.  Additionally, you can place that photo into other albums.

When you add that photo to another album, the Photos app does NOT create another copy of the image. Albums are virtual lists of photos and use no additional space no matter how many albums a photo is placed in. Photos can be linked to multiple albums.

Tap on the Albums icon.

to create/add a new Album

Indicate what you want to create. 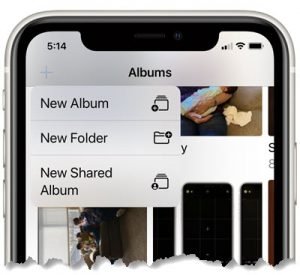 Tap Save to create the album.

After tapping Save, you are given an opportunity to Select pictures for the new Album. The process will take you your collections of photos where you can select photos by location or date. Tap the photos you wish to add to the new album and tap Done

Adding Photos to an Album

Launch the Photos app and display any single photo.

Optionally, you can place a check mark on additional photos to add to the album.  Swipe left or right to view the photos and tap the photo to add a check mark. 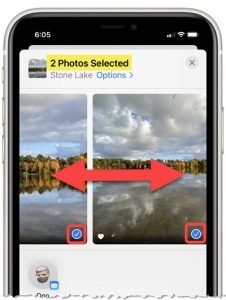 Scroll to find the desired Album and tap. Notice the cute animation that depicts the photo moving to the folder.

Tap Albums on the bottom to view your album collection.

Tap an Album to view photo thumbnails in any Album

Tap individual thumbnails to place a check mark by the photo.

Tap on Add to Album

Browse the Albums and tap the Album you wish to include the photos you have checked. Notice your screen shows the number of photos that will be added to the album for confirmation.

You can also create a new Album with this process.  Instead of selecting an existing album, tap New Album and provide a album name. 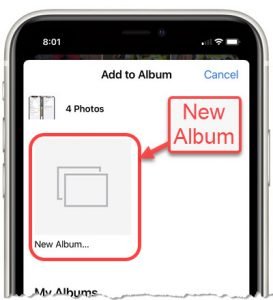 Here are a few ideas about using albums to organize your photos:

Reference Album – Consider taking photos of the important information in your life and adding those photos to a dedicated reference album. For example, take pictures of license plates, insurance cards, membership cards, etc and store in a Reference Album.

Project Album – Involved in a home project? Consider creating albums to organize the photos your take showing progress on the project.

If you anticipate creating many albums, you can organize your albums with folders.  For example, if you want to create albums to organize all of the photos you take during vacations, you could create a folder called Vacations and then create albums under that folder name for all of your vacations, e.g. Boston 2017, California 2018, Italy 2015, etc. This process of creating a folder is quite hidden and also not documented in the IOS User manual. Tip:  If you are using an iPhone or iPad to organize your album, you will need to create your folders before you create the albums in the folder.  The IOS Photos app provides no method to drag an existing album into a folder.  However, if you are using the Photos app on a Mac computer or laptop, you can drag an existing album into an existing folder allowing you to organize your albums into folders after your have created your albums.   Here are the steps to create a folder:

Create an Album in a Folder.

After creating a folder create an album within that folder with the following steps:

Add photos to this album as you would any other album

Delete a Photo from an Album

When you wish to delete a photo from an Album, you tap the same Delete icon

as you type when you wish to physically delete a photo.  However, when you start the delete action from a photo in an album, you are presented with two choices: 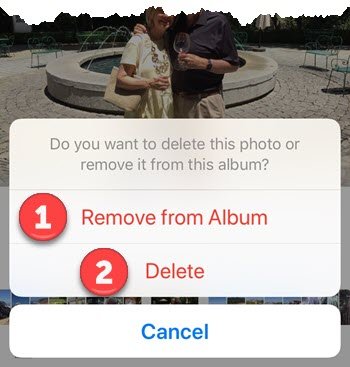 Albums are the primary method that iPhone photographers use to organize their photo collection.  Consider creating albums for events, vacations and custom collections of photos you with to keep.