Using an iPad is pretty intuitive.  But you will use it differently than how you initially use an iPhone.  This makes gestures and basic screen functions more important.

This recipe will take us through the basics for the iPad.

Smart Tip:  How to Kill an App

Pressing the Home button on your iPad is a “go to” action that provides access to the Home screen and even provides a standard action if you ever feel unforgettable with the actions of an app or if your iPad seems to be misbehaving.

Press the Home Button to:

The iPad provides the ability to support either portrait or landscape orientation when using your apps. The best orientation choice is often a personal preference. 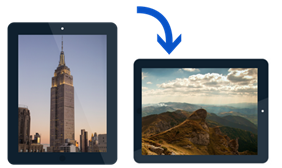 If not locked, the orientation changes automatically when the iPad is rotated.

The orientation can be locked so that it does not switch on this rotation.

On newer iPads, the Lock Orientation button is found on the Control Center.

The iPad’s touchscreen allows you to touch the screen to provide directions to the device. Use the pads of your fingertips (not your fingernails)

Here is a review of the essential gestures to direct your iPad.

You can switch between apps you have been using on your iPad.

A misbehaving app can be forced to quit with a swipe up action from the app switcher. Restart the app as you normally would. 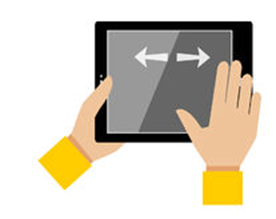 You can also quickly switch between apps with the four finger swipe. Place four fingers on the screen and swipe either left or right.

This gesture is most useful to quickly switch between two apps that you are currently using.

GCF Learn Free – iPad Basics: Getting Started with the iPad